I honestly don’t know how to formulate how confused I am right now: with the plot, the characters and the point of this drama… 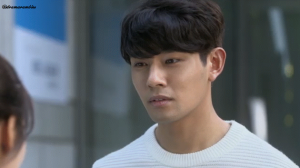 We find out that the reason YooNa went to talk to MongRyong was to resign from being the ‘Secret Garden’ fan club president. She tells MongRyong that she accepts his relationship with ShiHyun. She compliments her brother’s personality and says that she has never seen a side to him where he would cosplay.

MongRyong says that she must really like her brother, she only says that ShiHyun is her real brother (but he isn’t… also if they end up together… smh). MongRyong is about tell YooNa that he and ShiHyun aren’t in a relationship, but that is when the accident happens. YooNa pushes MongRyong onto the pavement (why were they even having a chat in the road anyway?!). We see the woman driver smile in her side mirror as before she drives away.

Back in the present, at the hospital room, YooNa wakes up and ShiHyun tearfully calls out her name as he hold her hand tightly.

We move swiftly to see ShiHyun contacting MongRyong in his car, telling him that they should meet on the company roof as ShiHyun has heard the truth of what happened from YooNa.

On the rooftop, ShiHyun’s first move is to slap MongRyong and demand why he didn’t tell him it wasn’t his fault. MongRyong rightly says that ShiHyun wouldn’t have believed him anyway. This causes ShiHyun to bring up the fact that

MongRyong had murdered someone. MongRyong tells him that he could understand what it would be like to lose someone precious to you.

MongRyong then tells the story of Chun Hyang, who isn’t his biological sister, just a ‘noona’ from his time at the orphanage). He tells ShiHyun that she was adopted and told him she was sorry for leaving. When she was sixteen, MongRyong heard that she was in the hospital with a disease that

couldn’t be cured. MongRyong’s noona called him to her room one night and asked him to help her.

MongRyong refused at first, but inevitably removed her ventilator (so he assisted in her suicide. This is so sad!). MongRyong tells ShiHyun that he really liked her.

MongRyong then starts crying about how he took the wrong route and if he had chosen a different one she would have survived. Turns out that didn’t happen and was just a game called Haruka, which translates to Chun Hyung (honestly I could be wrong, I’m still so confused as to what went down on that rooftop!). Rightly so, ShiHyun is completely confused, especially as Secretary Kang found out that he murdered someone (you and me both ShiHyun!).

As MongRyong goes to leave the building he tells ShiHyun that YooNa said the two of them were alike (he also tells ShiHyun to look after YooNa as she cares about him more than he knows). This causes ShiHyun to stomp around on the rooftop, doing what he does best: talking about poop.

Back at home and all healed, YooNa is looking at photos in ShiHyun’s office. He come storming in and she quickly puts the photo-album away.

It seems that a lot of time has passed as he throws a book onto the table ‘Prince’s Prince’ and tells her to read it. YooNa gripes that he always teased her about being an otaku, implying that he is one now.

ShiHyun hit her playfully, and she reminds him that he’ll grow old and alone if he isn’t nice to girls. He also reminds her that:

“It will be alright if you live with me my entire lifetime, as my servant or as my slave.”

In MongRyong’s voiceover we also hear that we all have secrets, because the secret is so previous that you don’t want it to be revealed.

This leads us to ShiHyun on his laptop, once again looking in MongRyong’s files. He clicks on a file to find a picture of the ‘noona’ we see in MongRyong’s “memories”. He wonders who she is. In voiceover MongRyong says:

“The secret hidden because of fear from thinking about the criticism.”

We then shift to the woman who ran over YooNa, and she agrees with his phrase about taking something precious from someone in order to hurt them the most, as that is what he did to them. She is holding a phone with a picture of the girl (I assume that this could be her mother? or adoptive mother rather?).

In his office we see the CD’s his noona gave him on his desk and an image of gameplay in a hospital room on the computer desktop (I’m assuming this is a game he has made). MongRyong continues to voiceover:

“If you keep pouring everything into it, then the weight of the secret change me and others, and furthermore, the world. The very secret for me is… noona.”