So much wasted potential…

Ban JiYeon (Uhm JungHwa) is a reporter for Trouble Maker, a paper built upon finding the next “sexy” topic. The CEO’s words, not mine haha

JiYeon’s crazy antics (due to her passion as a reporter) puts her in the path of Yoon DongHa (Park SeoJoon) who happens to be her neighbour! Oh and is 14 years her junior and is the first male lead, so love ensues!

DongHa and JiYeon both have tragic pasts in the romance department and through working, living and just plain getting in each others way they heal.

This drama started off incredibly funny and ridiculous, with a large amount of kissing and passion. This changed dramatically. While there was still the cute and quirkiness of the drama, the passion seemed to dissipate, especially when JiYeon’s ex ShiHoon (Han JaeSuk) comes back into the picture.

The acting was great in this drama, JungHwa is expressive and I love that she isn’t afraid to commit to ugly crying! And SeoJoon is so swoon-worthy and has wonderful chemistry with every one of his leading ladies.

The second male lead, ShiHoon was so handsome, but he didn’t really have much of a personality. He seemed intent on being a better man and making up for what he had done to JiYeon, and there were several cute moments where I really liked them as a couple. However, this storyline dragged and then ended rather abruptly.

I was still in love with JiYeon and DongHa though! They were playful, cute and when they did kiss *fans self* haha

I also loved the side characters! Well, the ones who had personalities. Some of the staff at Trouble Maker were just there for their looks and numbers. Team Leader Byun (Kang SungJin) was hilarious in his misplaced hostility, Song YoungShik (Yoon JoonSung) was a loyal and somewhat dim staple in JiYeon’s team and Jung EunChae (Jung YeonJoo) became more than the timid younger sibling of DongHa’s ex-girlfriend and I loved her development!

We than had NaRae (Ra MiRan) and MinGoo (Lee SeChang) were wonderful and were consistently funny and I loved every scene with them in! They were dysfunctional, but so cute together. NaRae was a great best friend as she brought out the softer side of JiYeon.

And then JiYeon’s mother (Yang HeeKyung) was a treasure! And let’s not forget Yong SooChul (Yoon HyunMin), DongHa’s best friend, flatmate and a hilarious player! Their friendship was hilarious, heartwarming and brotherly. 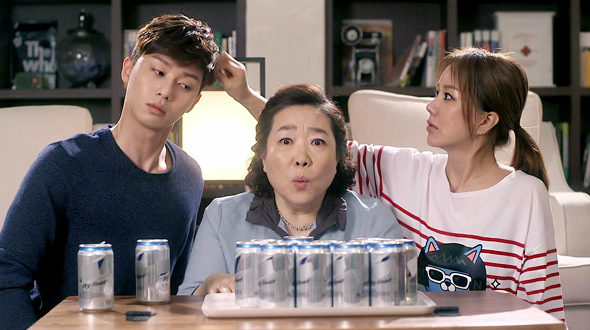 Now for the plot and where everything went wrong. The fun quirkiness was scattered throughout but the romance angst took centre stage from around episode 8 onward. Which wouldn’t have been a problem, but it dragged out and then the angst disappeared and everything was hunky dory! I mean I was still grinning like a fool when it got cute between the lead couple, but I would have preferred this drama to have been better paced or at least a little longer.

And the latter half brought in other news stories that were interesting but never went anywhere! I was waiting for another expose, but the story just disappeared…

And I don’t like when we get a year later:

especially  they are apart for said year after we’ve sat through nearly 16hrs of them trying to get together!

Oh and as I’m in a spoiler bracket, I wish SooChul and EunChae had more screen time so we could see their relationship actually form. We went from EunChae being somewhat aware of his attentions and then bam! They were together. And they were so cute too! This is why I want to watch Witch’s Court because HyunMin looks to be one of my new faves ♥ And JiYeon’s mother and the CEO (Joo JinMo)! My lungs hurt from laughing so much haha! They were great!

Overall, I did enjoy this drama, mainly because I’m a sucker for romance and angst and Park SeoJoon is so beautiful and good at his job that I would watch a drama with him being in love with a bloody door haha ^^”

However, the writers seemed to fizzle out of ideas near the end so decided to just give the audience a lot of fan-service instead of actual plot.

I’m glad I finally got round to finishing this drama, but I fear that it isn’t going to be memorable or one I rewatch.

What are your thoughts on Witch’s Romance?

Thank your for reading! I hope you are having a lovely day~