I will be discussing spoilers in this review!

Stay Away From Me (2017) is the second storyline in the HIStory series. 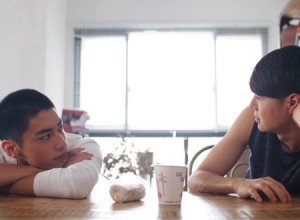 Feng He (Edison Song) and Cheng Qing (Duke Wu) become step brothers when their parents get married. While the parents are on their honeymoon, the two new brothers live together.

Now, my first rant: Why is that they have never met? I get that Cheng Qing is an idol, but he didn’t have time to meet his step brother? Plus did the parents elope? How did they not meet at the wedding? Also, they go to the same school and have some of the same courses? How the hell did these two not meet before this?!

I get that it’s just a story, but I’ve seen this in other dramas and I’m like, how?

Second rant: At first I thought Meng Meng was hilarious, and simply a bl fan. It’s weird that she writes fanfic about her best friend, but meh, I can live with that. But then she starts taking covert pictures and tricks Cheng Qing into accepting a confession that Feng He never made! I was so angry and it leads to so much angst.

But there are no consequences for Meng Meng. She’s so oblivious to what she did wrong and then when she finally understands, they just forgive her.

I will say her bl daydreams were pretty hilarious though! haha

Despite ranting, I did enjoy this drama. The two guys were both endearing in their own ways and I completely understood each others struggles.

Feng He was conflicted with how he should be a good older brother and the romantic feelings that he was starting to feel for Cheng Qing. And that made so much sense. However, I just wish that he could have spoken to Cheng Qing about this. He just blanked him and wouldn’t talk to him.

Cheng Qing is an idol, and he was struggling with balancing his celebrity life and schoolwork. Meanwhile, Cheng Qing was so open and honest with his feelings for Feng He. After he confessed, he never regretted it.

There were so many cute moments when they were so sweet and shy with each other. The romance was cute and I was so on board from the get go. The angst was inevitable, but I just wish the pay off could have been bigger.

Don’t get me wrong, but the ending was so sweet and I was smiling like a moron, but come on, we couldn’t have gotten a kiss? We got a hug. Hugs are grand, but I was expecting more haha

So far this is my second favourite storyline after HIStory: Right or Wrong