Potentially, 🎵 Love is in the air 🎵

DanBi breathes a sigh of release when she realises that Lee Do is referring to her still having an orange hidden in her clothes. However, he doesn’t take it when proffered it and suddenly decides to go incognito, which he has never done before, so that he can walk DanBi home. 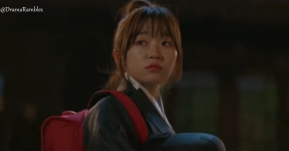 Lee Do orders DanBi to stay put while he goes to get changed (the way she smiles after him, my heart!). However, when he is happily putting his hat on, Lee Do becomes serious and puts his hand to his heart.He recalls DanBi telling him about the heart and that your heart beats around the person you like.

Meanwhile, DanBi has been waiting for so long that she falls asleep. It’s not Lee Do who wakes her and takes her home, but AhJin.

Elsewhere in the palace, father-in-law has a plan to get his daughter pregnant and that involves a little bit of aphrodisiac in the Kings food (I love that Lee Do has made ddeokbokki a staple in his diet haha).

Most likely because of his guilt for not doing as he said, Lee Do gives his meal to DanBi. He explains that he got so busy that he completely forgot about his promise (what a liar! You even care about her getting fed at home and suggest she should move!). Not feeling high-spirited, DanBi hides the orange she planned on giving him (it’s got a smiley face giving the thumbs up :3 so cute) in her sleeve and they start their lesson.

The lesson and Lee Do’s gazing at DanBi is cut short when the Queen enters, intent on getting intimate! However, due to it being DanBi who is becoming hot and flustered and not the King, her advances are shot down. Her next move is to reveal that she is lonely, however, Lee Do simply replies asking who isn’t lonely in the palace and tells her not to force herself. 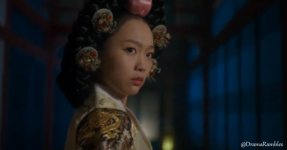 At this serious moment, an orange rolls into the room, and a stumbling DanBi needs to be caught. While holding her in his arms, Lee Do is evidently worried, while the Queen is far from happy at his concern.

Now, alone, Lee Do continues to try to get DanBi to respond to him (he says he can’t get the Royal Doctor? Is that because he knows she’s a woman and a Eunuch can’t be a woman?!?!). 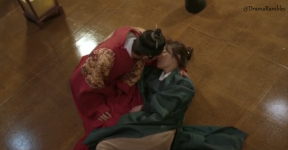 Finally, the aphrodisiac takes effect and DanBi tries to kiss and hug a frustrated Lee Do, who is trying to quieten her down. However, some noise does escape and the Queen, who turns back and glares in the rooms general direction.

DanBi starts moaning about him and how she will leave when the rain comes. This causes Lee Do to ask if she thinks he keeps her with him because he likes her. DanBi’s response of “I like you a bit” shocks him and he tells her to leave when it rains!

Having been detached from Lee Do, DanBi moves closer to him and rests her head on his lap and seems to fall asleep. Lee Do’s expression softens and he leans close to DanBi, which what looks like the intention to kiss her (this is a drama cliché I don’t like T_T).

It looks like our high and mighty, yet playful king is starting to get feelings for DanBi. And it’s hitting me right in the feels!

I am definitely looking forward to how their relationship progresses. This is one of the funniest and cutest dramas I have ever seen :3 I’m pretty much absorbed by the main couple, but they are throwing in some interesting characters and plot, which hopefully can be expanded on in the short time this drama has. But, honestly, I may not be mad if it doesn’t, I just want the main couple to be executed in the same manner and for me to be smiling from ear to ear.