A Method To Remove A Bandaid

(Whenever I hear ‘bandaid’, I think of the band, and not a plaster…)

This was actually a very good episode which held my attention considerably more than it recently has done.

We open with NiNa kissing WonYoung on the cheek and once she has driven away, WonYoung smiles, a little bashfully (erm… why?). He walks into the house and is met with barking! KkotDongie is not happy and thinks he is a traitor (WonYoung moans that he has to be tactful even with his dog! Ha!).

Meanwhile, WooRi throws us back into flashback land. 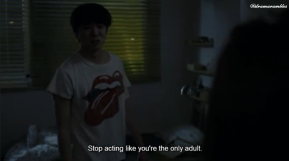 WooRi goes to a small nightclub to cheer WonYoung on, however, all she does is watch from a distance. WonYoung is obviously not into the performance and we see that he is frustrated with the fact that they haven’t debuted yet. Later that evening WonYoung comes in drunk and isn’t pleased to see WooRi waiting up for him.

WooRi is concerned about his actions, which only annoys and angers WonYoung. He doesn’t want to have this conversation now, telling her not to act like the only adult (even though he is actually like a stroppy teenager) and walks out of the room.

We then relive the first scene of this drama, however, singing is replaced with WooRi explaining the situation to HyunWoo: 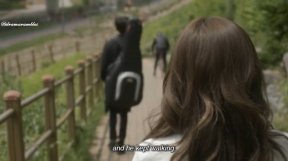 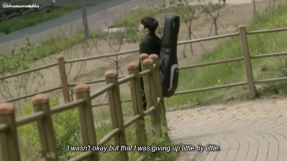 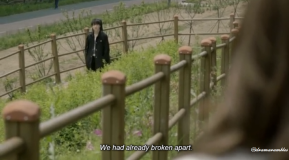 We learn that they broke up properly, and easily, a few days later. WooRi admits that it’s been strange between them lately. HyunWoo takes her hand and tells her that he will wait for her, but that using the ‘ripping off the bandaid method’ could be good for her.

The next scene is WooRi packing up her belongings. She pauses when she holds a jar of memories, but quickly shoves it into one of the boxes when WonYoung comes up behind her and asks if she is moving out (such a genius we have here…). 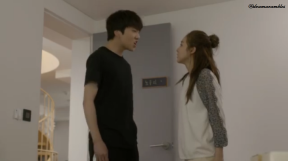 WooRi explains that she can’t continue to wait for the deposit and that she has somewhere she can go now. WonYoung says that everything is going well for the both of them after the breakup and WooRi says they should have broken up sooner (while noticeably not okay with his train of thought).

WonYoung then asks if she is going to move in with HyunWoo. WooRi gets up and is about to leave the room, however, WonYoung pulls her back intent on getting an answer. He shout at her, angry at the thought of her moving in with a man so quickly after their breakup (this guy is walking contradiction). WooRi becomes just as angry and slaps him (… that was the lamest slap I have ever seen…). WooRi is shocked by her action and leaves the room, telling WonYoung he doesn’t know anything.

The next day we see WooRi carrying a box of things to work, which she promptly drops… NiNa helps WooRi pick her belongings up and they then sit down and talk together. NiNa asks WooRi what WonYoung likes, as she can’t figure him out. WooRi’s answer is that he probably like people who are confident, attractive, just like NiNa and WonYoung is just trying to act cool.

NiNa admits that she is jealous of WooRi, as WooRi has knowledge of and experiences with WonYoung that NiNa doesn’t.

Meanwhile, we see HyunWoo coming out of a building, probably looking for WooRi (I mean who else does he look frantically for?). Instead of finding WooRi, he spots WonYoung and the pair have an intense stare off, while WonYoung gets mobbed by several adoring fans.

Now in the studio, their practice is cut short by NiNa, who has brought with her, DaBi, a singer who has “kindly” offered to share their debut stage. However, DaBi is a horrible singer, but instead of calling her out on it, everyone makes excuses for her. After she leaves, HyunDong asks if they did something wrong and WonYoung reassures him they didn’t, expressing how this is why he doesn’t like to play with idols (especially those from YG! Ha!).

The mood shifts dramatically after this as, WonYoung finds out that the executives want him to go solo. Of course he is furious and fully against the idea as he argues with NiNa. She tells him to think about the opportunity he is being given.

At home, the boy are sharing drinks and food. HyunDong starts surmising why NiNa called WonYoung into her office. The latter tells him to stop talking nonsense and shoves food into HyunDong’s mouth, which doesn’t stop his high-spirited mood at all! What does is thinking about how much WooRi loves meat as well, he calls a cold wench for leaving without a word, but quietly mumbles that he wants to see her (it’s like his mother has moved away! Bless him!).

WonYoung is upset by WooRi’s departure being the topic of conversation and ShimHoon notes his low mood (which has been present all evening) and tells him to be strong (my gosh Kim KyuHo’s voice is so gorgeous! ♥.♥): 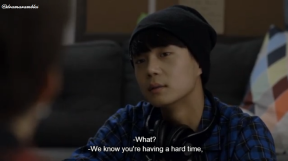 ShimHoon tells WonYoung not to worry by himself, who nods dumbly and agrees. HyunDong shatters this serious moment and hugs ShimHoon, who tells him to say ‘HyunDong Hyung’ now that he is speaking (Ha!). WonYoung smiles at the two, but his expression changes when he glances at WooRi’s bedroom door.

The next thing we know, HyunWoo, who has been woken up, is answering his front door (which is being banged on by a drunk WonYoung shouting for WooRi).

WonYoung charges in a searches the apartment for WooRi and not finding her confronts HyunWoo, asking where she is and what he thinks he is doing with an innocent girl. HyunWoo tells him to not speak carelessly and that’s when the fists go flying and the end scene is the pair grappling on the floor.

We got to learn more about how and why WooRi and WonYoung broke up. In a sense it was essentially that WonYoung’s love for her cooled, especially as music and the want for debut became more and more important to him. But there was also the deeper element that they had separated from each other without truly realising or coming to terms with it.

Mars Music is causing a lot of stress for WonYoung, whereas it was WooRi’s company that was doing that in the previous episode. This time they want him to go solo and hopefully (and also by the looks of things) he won’t take up the offer.

We also got to hear ShimHoon speak!! This glorious voice was kept from us until the penultimate episode?!?! Such injustice! I thought it was a great time for him to finally speak though, as he realised WonYoung was having a hard time and wanted to reassure him that they were there for him.

I liked that HyunWoo stepped back a touch in this episode, and I think he is trying to give the best advice that he can, because from his standpoint he doesn’t want to see WooRi forever thinking about WonYoung and not progressing in life and letting herself love someone else.

NiNa, on the other hand, is trying to get closer to WooRi and I think that it’s kind of, I really don’t want to say ‘desperate’, but it kind of is. I also think it’s also underhanded as NiNa seems to me the type of person who can clearly sense that WooRi still has feelings for WonYoung.

We saw at the end of the episode, a drunk WonYoung was on a mission to find and save (by the looks of things) from the evil clutches of HyunWoo. I get that WonYoung is drunk, but HyunWoo shouldn’t fight back in this situation. I get that he is angry, but this isn’t how people should solve things!

I’m really interested to see what happens in the finale now!!