I Don’t Know You

It’s Saturday and that means recap time. This is the halfway point of the OnStyle+ and YG webdrama and I’m having fun watching it, although I have caught the dreaded second-lead syndrome! 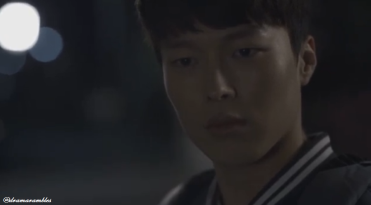 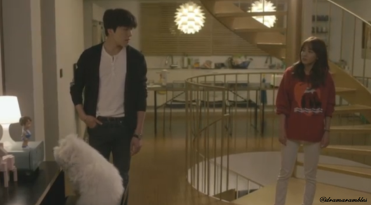 We start back up where we left off last episode and we are right up close to HyunWoo and WooRi. Of course, there is no kissing happening. HyunWoo gets something out of her hair and then they happily say goodbye to each other (out little lead a little drunk). HyunWoo leaves and WonYoung walks past him, glaring at him as he passes.

HyunWoo looks a little upset and confused to see that the WonYoung went into the same house as WooRi (I guess he wouldn’t know they still lived together or he is wondering what the glare was for (?)).

WonYoung comes up the stairs and asks her where she has been, that being drunk like she is makes her seem easy (harsh!). However, WooRi stands up for herself, reminding him of when he stayed out all night. He comes back with a comment about how her kissing on the step will upset the neighbours, and even though she doesn’t quite understand what he means, WooRi shuts him down with his own proposal that they don’t interfere with each others love lives.

Angered by this, WonYoung goes into his room, slamming the door behind him. 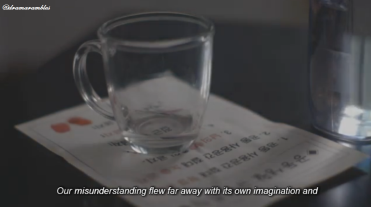 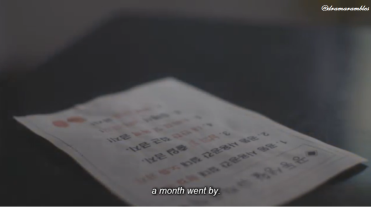 A month passes by and we see that the mains are at loggerheads, parts of the contract being ignored in spite.

Then we head to the library, where WooRi and HyunWoo are extremely happy to be chosen as finalists for the company they interviewed for in Episode 4: GaHa Entertainment.

On WooRi’s first day of ‘internship’ (Is that what she is? or has she been hired hired?…) we see her rushing into the building, but outside we also see WonYoung, who briefly notices her, going into the next building along. 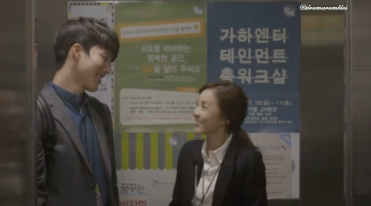 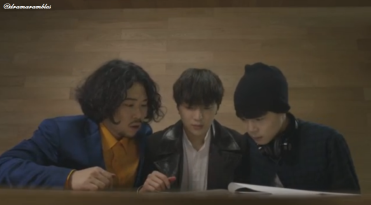 Inside, WooRi runs for a lift and inside is a beaming HyunWoo who wishes her a good morning and congratulates her, she does the same (joking that he sounds like he’s in a movie~). Their cute moment isn’t even damaged when they get separated in the lift by a huge crowd, as the pair look to each other and smile! (These two are so cute together, why must I have second lead syndrome?!).

In the next building (which is Mars Music) the three stooges are signing a contract. They are asked if they have girlfriends (of course HyunDong says he has several… that man!) but WonYoung remains silent, his status being shared by NaNi instead (does someone not want to admit to themselves that they aren’t dating a certain odd noona?). After the boss and his team leaves, NaNi suggests they go for dinner tonight and they shout CALL in unison, throwing in some hearts! 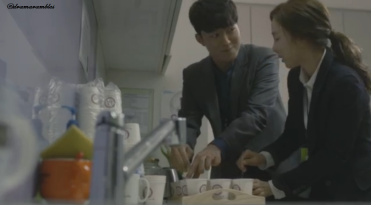 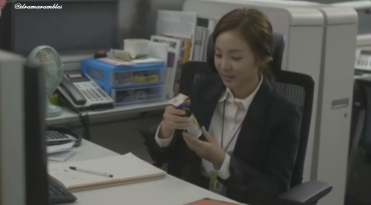 WooRi’s day is a lot more stressful and she is plunged into the world of work. Thankfully, HyunWoo is there to help her out and give her encouragement. We even get to see the mopey faced YeonWoo (who is dragged away by JoAh – are those two dating? haha). 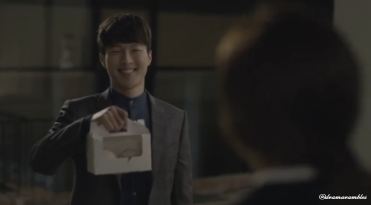 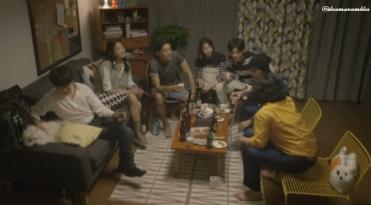 When the working day is over, HyunWoo walks WooRi home and she thanks him for his help. Once they reach her house, he pulls out a box with two cupcakes inside, his gift for them to celebrate their first day (ugh he is too cute *dies*). WooRi invites him in, but both she and WonYoung are not impressed to see each other. The latter is having a celebratory party with the rest of the housemates and NaNi over their record deal.

And WonYoung is even less impressed to see ‘this tall stranger’. WooRi tries to diffuse the situation and suggests they go outside, but HyunWoo takes her hand and introduces himself (NaNi sweetly tells him to say hello if they see each other as she works in the building next door). HyunDong invites the pair to join them and makes it a party to celebrate her first job as well. 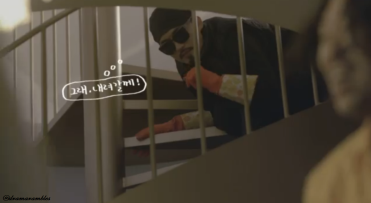 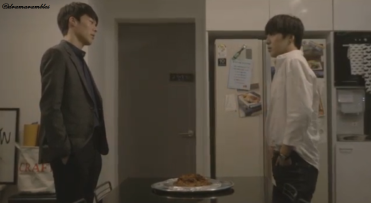 While the group are chatting and having fun, Mr. Cha is at it again, but this time HyunDong notices something amiss. He forces WonYoung to investigate the kitchen with him. WonYoung shouts for Master to come out, and he is about to (he’s hidden on the stairs), but HyunWoo walks in and he instead escapes up the stairs!

The pair face off over Mr. Cha’s special pork dish, while HyunDong tries to make things as friendly as he can. The pair go back and forth, which results in HyunWoo being tricked to say he is a woman, WonYoung giving a lecture about how everyone and their mum says they were in a band nowadays, among a few others. HyunDong tries to suggest they play a game, but the pair ignore him and he runs off, calling for WooRi and the two men have a stare off while CL’s MTBD plays in the background.

We then watch as the whole group plays a drinking game. WonYoung looks rather concerned when WooRi says that she has had enough. He says that they should stop playing as the game is boring, but HyunDong is not ready to call it quits. HyunWoo then plays black knight and downs the drink for her, however, this causes an awkward atmosphere and HyunDong tries to bring it back with a new punishment.

Whoever loses and has to drink a pint, but doesn’t want to, needs to go onto SNS (a social network site) and like a post made by their ex. Of course WonYoung is not happy and it’s just his luck that when they play another drinking game, he is the one that loses. 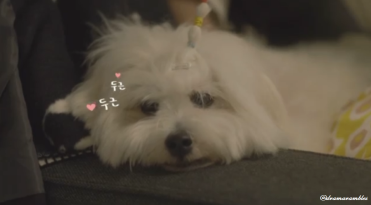 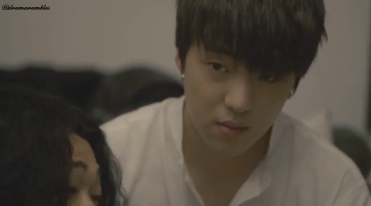 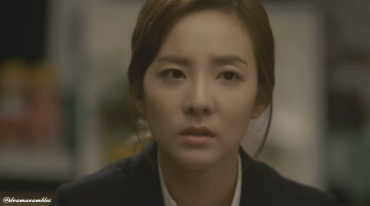 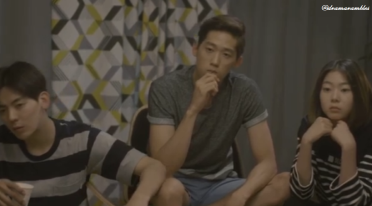 HyunDong gets his phone out and even helpfully inputs WonYoung’s password for him (this man has no chill!). WonYoung looks at WooRi and then down at his phone, hesitant to follow through with the punishment (I was a little confused at first at what this meant, but I saw a comment on Viki that explained that if he goes through with it, he is very much admitting that they are split up, which he may not want to fully admit because he still has feelings for her).

The build up in this episode was fast and in a matter of minutes we had progressed a month, which was a little jumbly, but for the most part understandable.

The episode itself was pretty hilarious, even though there was a thread throughout of WonYoung’s jealousy and just the bickering (vocal and the silent kind) that went on between our two leads.

About the jealousy, I’m just not sure I care at this point… WonYoung still has feelings for WooRi, that is obvious, but at the same time: HyunWoo. The way their friendship grew after that month was so cute. HyunWoo is absolutely adorable and they have a cute little chemistry going on. As there are only 10 episodes and said episodes are very short, I’m scared that this second-lead syndrome won’t leave me…

And at first I thought that WonYoung would give more attention to NaNi, but that hasn’t happened, even though I think they could be quite a cool couple. This episode, NaNi wasn’t very present, it was more about the WooRi/HyunWoo/WonYoung triangle, but I find her character very likable.

I will admit that at this point, it’s the quirkiness of this drama and the side characters which are making me really love this little oddball of a show.