It’s Sunday and here as promised is the eleventh episode recap of I Order You~ This one made me cringe, smile and get annoyed. Be prepared for more drama to come in this little webdrama.

SongAh wakes up after having a bad dream, where we see her dropping her umbrella in the street after she sees her mother at the accident site. (wait , why is she outside? I thought SongAh wasn’t well at this point…).

While eating breakfast, SongJoo asks why she is so gloomy, once he has the answer he tells her, not something previously unsaid, that it wasn’t her fault. SongJoo then says some wise words: “Humans must forget in order to live on.”

SongJoo then changes the topic and asks if she is dating, that it’s written all over her face. He suspects Kevin, but SongAh denies that, so his next guess is GookDae. He jokingly tells her that they should have a marriage meeting between their two families! 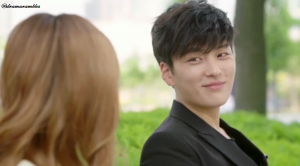 Later that day, SongAh and Kevin are sitting on a park bench. He asks her how things are with GookDae, but then says that he isn’t curious and not to tell him. Instead he changes topic (sort of) to say that SongJoo phoned him asking lots of questions about GookDae, such as his personality and income. Kevin reassures her that he told SongJoo that GookDae is a good person.

SongAh then gets a call from GookDae who asks her if she is filming a movie and to move away from Kevin. She looks around and a few feet away stands GookDae. He comes over and hands a bag to SongAh and asks
Kevin if he should not misinterpret the situation. Kevin tells him that he was simply counselling SongAh on some of her problems, which she provides to the conversation as being SongJoo. 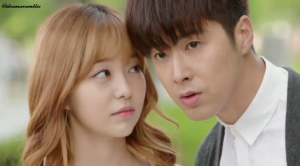 GookDae then asks SongAh was about ‘brother-in-law’ (this is cringey and I don’t like it!! This is making me so uncomfortable! *cries*). Kevin tells them that he should phone SongJoo to tell him the news and that he will be so overjoyed as to run around barefoot (oh the sass! I love you Kevin!).

Once they are sat down, SongAh asks if he is angry, but he is amazed that he is jealous about her talking to Kevin. As punishment, she has to eat his leftovers which he made into a packed lunch for her (I volunteer to take this punishment haha). 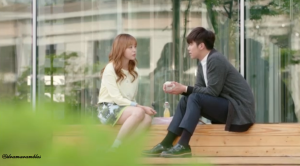 She takes a bite and is very happy.

GookDae wonders when he will taste some of SongAh’s cooking and she asks in return if he wants to taste hell. He shakes his head and SongAh looks pleased. He asks about SongJoo and SongAh replies that her brother wants to meet him, as he sees her more as a younger sibling. GookDae notes that it sounds like a declaration of war.

Changing the subject, SongAh asks about his arm, and is relieved to hear that FLada should be able to open again soon. GookDae then asks for a favour, to change the name of the shop. He goes to tell her why, but she cuts him off and agrees that she will think about it. The atmosphere turns rather awkward. 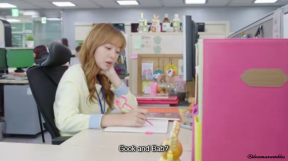 While at work, SongAh thinks up ideas for renaming the restaurant, but can’t think of any that she likes. She then thinks about what she said, about accepting GookDae for who he is. SongAh texts him saying she has something important to tell him at the shop after work.

SongAh’s workday is over and now she is chatting with the FLada sign. She tells the sign not to think she likes it, just because she is keeping it (which is a good move SongAh!). She isn’t happy about it, but thinks she is making the right decision. To vent some of her annoyance over the name’s connections to beats the sign up a little (ha!).

It seems there is no-one inside the restaurant, but SongAh hears DaHwa shouting at BiRyong, asking if GookDae is avoiding her. BiRyong tells her that GookDae isn’t but is just at the hospital. DaHwa is not placated and continues to shout angrily about how GookDae wants to change the name of FLada and that it will make her feel like dying if he does that. Her happiest memories were at the restaurant. 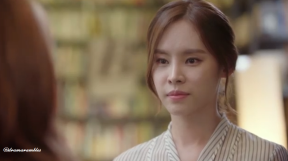 DaHwa storms out of the backroom, followed by BiRyong. SongAh had tried to leave but wasn’t quick enough. DaHwa immediately accuses her of getting GookDae to change the sign, out of jealousy, but SongAh responds that she has done nothing of the sort.

However, DaHwa doesn’t believe her and instead calls her a child, one that is selfish and immature. She tells SongAh that if the name changes that means GookDae will have to start all over again with gaining a reputation for that new name. 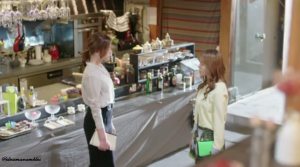 BiRyong tries to get DaHwa to calm done, but is only brought into the conversation. He tells her that he opposed the name, but he also opposes changing it. He is sorry, which SongAh tells him that he needn’t be because she came so that the sign wasn’t to be changed. That she isn’t the type to obsess over a sign (ooh burn!). BiRyong then tells DaHwa that he will drive her home and goes off to get his car keys. 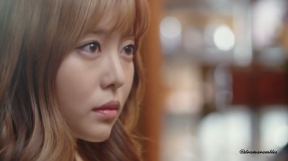 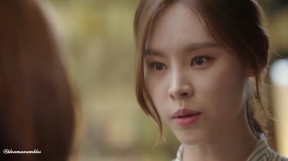 SongAh does not want to play this war, as she sees that the winner is obvious. As a comeback, DaHwa tells her about a wooden case in the wine cellar. That she opened it once and GookDae was furious with her. SongAh is not curious, but DaHwa tells her what was inside anyway: a picture of a woman. She tells SongAh that she needs to get over this woman, like she did in order to be with GookDae. She also notes that the woman looked similar to SongAh, which may be why GookDae chose her (It’s going to be her mother. I’ve watched way too many dramas to not know this! haha ^^”).

With that she leaves, followed by BiRyong, who tells SongAh that GookDae will be back from the hospital soon. 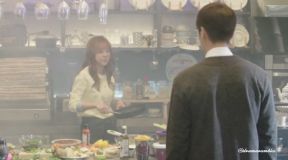 GookDae rushes to FLada and hurries inside as he sees the smoke. SongAh is behind the counter and GookDae asks if she is alright. SongAh is cooking… sort of. GookDae looks at the pan she shows him and the mess on the counter in horror.

The smoke has cleared and GookDae is watching carefully as SongAh cleans the counter. He is mad and he isn’t happy that SongAh keeps complaining as she washes up. He tells her that this is his workplace, not a playground. However, he is unable to fully scold her when she says she wanted to give something back to him, as he is always cooking for her (at least we know that she wasn’t kidding about tasting hell! haha).

GookDae tells her they should promise to stay out of each other’s fields of expertise and tells her to sit by the side so he can cook for her. 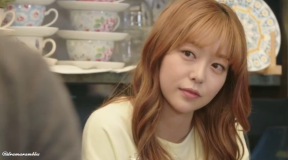 SongAh gets a little upset when he gets something close by to her, but doesn’t acknowledge her, so she starts to talk to him. However, she only gets out one word and then is swiftly interrupted by GookDae, who asks if she is going to keep calling him ‘sajangnim’ (president).

She walks over and asks what she should call him instead. GookDae offers up ‘honey’, ‘dear’ and ‘sweetie’. SongAh suggests the ‘American way’ of just calling him ‘GookDae’. He likes this and then says ‘honey’ and ‘baby’ in English (I hate those kinds of couple pet names but if YunHo said them to me I wouldn’t mind haha :p).

Once they settle on ‘GookDae-shi’, SongAh asks why he doesn’t look or smile at her while he is cooking and they come the agreement that at the moment she will do that. SongAh then gives GookDae a back hug. He is happy, but decides to play with her, and tells her that a kitchen is a dangerous place. SongAh tells him to stop whining (ha!).

He turns round and tells her if she continues she won’t be able to go home.

SongAh is adamant that she won’t be seduced by him, as she walks away he grabs her arm and pulls her close to him. The pair gaze into each others eyes for several moments until GookDae muses that this must be why the national anthem has four verses. They separate and the mood becomes awkward, to top that off, GookDae starts singing the national anthem and heads out (I think someone got a little too excited haha).

Later on the two begin to joke about while eating, but the mood shifts 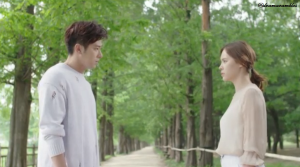 when divorce is brought up. SongAh then asks, tentatively, why he and DaHwa split up. GookDae says they didn’t, that DaHwa just left him.

A flashback plays, six months after she left him, of them meeting and him demanding to know why she left him. DaHwa refuses as she doesn’t want to hurt him. Back into the future, he relates that he still doesn’t know why. SongAh asks him if he is curious, but he shakes his head, and tells her it doesn’t matter as he has her.

This leads SongAh to bring up the topic of the sign, saying the name doesn’t need to be changed. SongAh tells him that the past and DaHwa won’t disappear, and instead she wants to focus on their future. GookDae tells her to reassure him that she won’t throw him away, no matter what happens and she agrees.

SongAh asks him if he has any wine, as she wants to make a toast to their

future. To ‘respect the elderly’ (haha SongAh is hilarious) she goes to get it (and we all know what is going to happen next).

While getting a bottle, she notices a wooden case and hastily checks through it. She gets up, thinking that DaHwa lied. However, when she goes to leave, she turns back as she had noticed another case. She opens it and takes out a smaller wooden box.

But before she can open it, GookDae comes in and takes it from her, saying that this isn’t something she can just carelessly touch. He puts the box back and goes to lead her out, but SongAh refuses to leave. 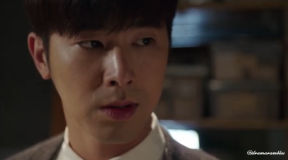 She wants to know about the woman and any others he might be hiding. GookDae thinks she has seen the picture and tells her that the woman in the photograph is someone who died because of him.

I like this drama, I do. However, the characters can be all over the place… especially GookDae. I mean, he’s cute and everything, but he changes so much depending on the episode. But I will say that I love SongAh, she is a great female lead. She can be compulsive and not too bright at times, but she stands up for herself and she does make some good decisions.

I will say though that the side characters are more interesting to me. I really miss DoekHee and their chats. I hate it when female leads start to stop having interaction on screen with their friends, especially female ones!

I’m kind of over the ex-wife now. She is brilliantly played, but annoying. I think she was either ill or had an abortion/miscarriage which is the reason she left. Also, does BiRyong like her or something? He must know what had happened for her to leave GookDae, otherwise why would he keep in contact with her?

Also, I’m interested to see how this drama progresses, especially as GookDae thinks that SongAh saw the photograph, which I’m assuming from what I saw, she didn’t. It will be interesting to see how GookDae thinks it’s his fault, how SongAh will react, and subsequently how we find out it wasn’t really his fault (which will probably be the case).