To be honest, I’ve basically only been watching Thai dramas (and staring at my phone doing nothing) for the last 2 months, so here is the third part to the Thai Bl Bingo Board!

I’ve discovered that when I watch a lot of these, I recognise a lot of supporting actors. I just want Gunsmile and my queen Samantha to get a lead role! They deserve it ♥♥♥

I have currently watched 15 dramas! Here is my current bingo board:

Everything I disliked about 2MOONS was made better in this remake! The entire plot of 2MOONS was done in 4 episodes and it was way more fun!

There is far more plot in this series and we really got to spend a lot of time with the secondary characters and there was a lot of character growth for everyone.

Wayo and Pha were cute and I really think Ben did a great job. I was more impressed with the previous Wayo actor as I think Earth sometimes overacts especially when the character is angry or jealous (and oh boy that boy got jealous too much…). Overall, I do like this couple and I’m really looking forward to series 2 because that cliffhanger!!

Again, It was the secondary characters that really make 2MOONS shine. Ming and Kit were beautiful! Again, “we love a shy grump and a confident idiot pairing”. Also, we got to see more of all the friendships which I loved!

Oh and let’s not forget about ForthBeam! This was unexpectedly such a sweet pairing. I really like Forth, he is a sweetheart (in both iterations) and Beam was a bit frustrating, but him and Kit went through great character growth and I love seeing them all happy!

Now, I need series 2, so I can see Park and Pring get the comeuppance they deserve! 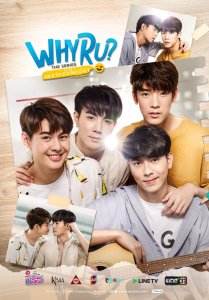 So, I wasn’t expecting to watch this one so soon as it ended. However, the last episode aired and I had seen so many clips of Saifah and Zon that I just needed to watch it.

This was actually so good! Parts of the pacing were a little off, but that was mostly near the end and honestly with Coronavirus, I’m just incredibly grateful for the entire team giving us what they did.

This is a drama basically about Tutor and Fighter. They get the most screentime, which felt strange to begin with because it starts out being so heavily about Zon. Both characters grew, especially Fighter. That boy went through it! And I love that he became so comfortable with who he was and stood up to his dad, but also recognised that certain elements of his behaviour weren’t acceptable. Considering that Zee hasn’t really acted before, he was amazing!

I will say the problem with this couple was they didn’t talk enough about important things. Some of those make out/sex scenes could have been cut for them to actually lessen their pain. I mean talk about pacing, we had a whole episode of them going to the beach and having sex… like am I complaining? No. Could I have done without it for more plot and actual development? Absolutely! (but would it have been as popular? 👀) 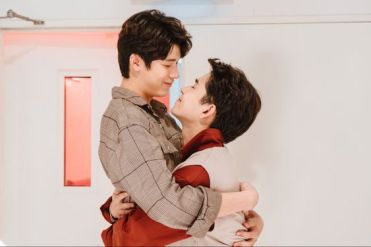 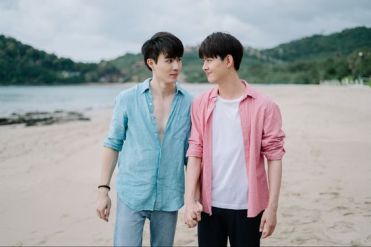 Zaifah and Zon were adorable and unproblematic. I kind of wish they were the leads and it was like a soft, Sotus type, drama. They were so cute, funny and just really heartfelt. Tommy and Jimmy did amazingly for their first proper roles ♥

Certain side characters were cute, but vastly underdeveloped. This even includes Hwa Hwa if I’m honest.

The animations and drawings included (which were used mostly for Zon’s character) were stunning! They added such a cool and fun dynamic to the drama that made watching even more enjoyable!

This drama has such an interesting concept. We follow a young man – Mes – who is a ghost unable to reincarnate and a boy – Than – (who grows into a young man) who can see him. There is a mystery element in terms of why Mes can’t reincarnate and what actually happened in his last moments of life that was intriguing.

It was a sweet and comforting look into the afterlife, relationships and all about forgiveness and loving to the fullest.

I wish this was longer. 8 episodes isn’t overly short (most jdramas are this length), however, I do feel that we did have some unnecessary meandering. There could have been more on screen development of Than and Mes’ relationship, because it truly did feel more like a brotherly love than a romantic one. Than’s recognition of his sexuality was really well done and one of the best I’ve seen in a drama ♥

I think they had a great idea, but lacked in presentation. The music choices were super dramatic. But the acting really saved it! Singto is one of my faves and Ohm was one of the only good things about Make It Right. Also, Gunsmile was so Gunsmile in this. Plus we love a mini Sotus S reunion, ghost style!

The friendship group was really fun, and the incorporation of Mes into it was hilarious. It helped that Khiem was an idiot and we stan!

My main issue was the ending… they couldn’t give Mes a body?! Than really be out here just talking to himself for the next however long. I get that his mum and friends are understanding, but this idiot taught air how to ride a bike, in public!! He didn’t even have the forethought to get his phone out and pretend he was calling someone. I get that they were going with that Mes still had time left on earth, but in a physical body would have been better.

I want to preface this by saying that without Love Sick, the world of Thai Bl would not exist as we know it. It paved the way.

But by god is it boring.

There were far too many characters and not enough development. I don’t know if it was the actual plot, the directing or acting – or all three – that just didn’t make me want to care. After episode 4, I gave up watching the entire episodes (still counting it as watched tho!💁‍♀️). I only watched Phun and Noh’s parts as they were the most interesting, and even then I was so bored.

They were cute at times, but there was just no substance.

The only highlight was seeing baby Gunsmile ♥

I’m so glad the second series is not on this board, but also, I’m not looking forward to Thank God it’s Friday because it’s set in the same world…

This is one of the best dramas I have ever seen! I was intimidated at first because of the length and also the sad content, but I am so glad I decided to just go for it. I implore you to watch this drama if you haven’t. It’s stunning!

Of course, trigger warning for Suicide.

Pharm and Dean are reincarnations of two young men – Korn & In – from the 80’s, who tragically commit suicide. We follow their journey of discovering each other and the connections to their past selves. We see snippets of Korn and In that both show their love and parallel what is happening in the future. I adored those past scenes (Earth and Nine were phenomenal and I would love for them to work together again). 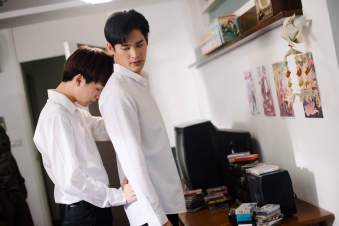 I will say that the past could have been better depicted as being the past… I get that much might not have changed stylistically, but there could have been even a time stamp or something. But to be honest, it’s not a big deal.

Anyway, I cried. A. Lot. The first 8 minutes of episode 1 were me just sobbing. In nearly every episode I would tear up, cry or just be heartbroken. I cried during a happy scene about a keychain because I knew what was going to happen later on… This is basically a warning to watch with tissues if you are a “crybaby” like me 😂

The similarities and differences between DeanPharm and KornIn were super interesting. At first, I thought Dean was In because he was the one who was so proactive and up front with how he felt. But, you soon realise that they have similarities with their past selves, but due to their past actions and also just their own upbringings have shaped them into different people. And I think Dean was the one who kept pushing the narrative that they were still their own people despite being reincarnations. This was super interesting to watch and all four actors were phenomenal. 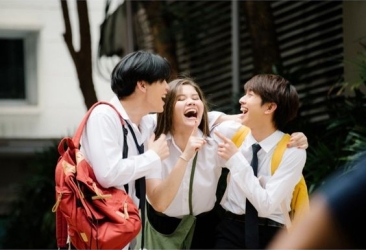 However, it wasn’t all sadness and trauma! No, we had so many cute and funny moments. Dean was hilarious by the way, “P’Dean” can only be said in a whiny voice, Del and Don were super supportive siblings, Manoaw was a QUEEN!! This is what I’m saying, Samantha deserves a lead role! And we also had another couple: WinTeam. They were super cute, they bickered all the time and they added a sweet reprieve sometimes when things got heavy. I’m interested to see what their series is like.

Oh, and it was basically a cooking show! I have learnt so much about Thai desserts just from watching this! 😂

Overall, everything about this drama was beautiful – the writing, the directing, the colour scheme, the acting – everything! I also loved that the plot and character growth were top priority. We did get some kiss scenes, but they were intimate in a way that wasn’t invasive and they were just lovely moments! Also, all the female characters were treated like people, there were no “demon” women trying to ruin everything or being led on. We also had a conversation about consent and being ready for sex that was listened to and understood by the other party!

My only criticism is the grandfather. I don’t want to spoil anything, but Korn and In’s issues are mainly due to their father’s. And near the end we have a super emotionally charged scene where Pharm is having trouble differentiating himself from In and Korn’s dad is present. It felt that the narrative and blame was being shifted onto Korn and In for what they did. It seemed that because the family suffered emotionally and have been grieving their loss for 30 years that they should be forgiven… I don’t know, I was very in the moment of the drama and even now I don’t think that matters. I was mad at that.

Even so, I still highly recommend this drama. It was beautiful and if SOTUS didn’t exist and wasn’t so ingrained in my heart, I think UWMA would be my favourite series of anything ever.

What did you think of this crop of dramas? I’m super happy with most of them!

Are there any you think I should watch asap?

I hope you are having a lovely day and staying safe ♥