Girl Cops (2019) or Miss and Mrs. Cop was a film that I was looking forward to watching last year, but never got round to it, but thanks to my Idol Actor challenge I had to watch it!

Mi Young (Ra Mi Ran) was a former member of a female task force, but is now part of the public sector as the female task forces no longer exist. Instead of dealing with criminals, Mi Young deals with complaints and petitions. 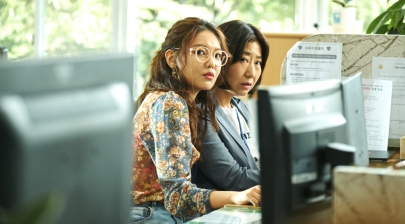 Her sister in law Ji Hye (Lee Sung Kyung) is a detective with a strong sense of justice is sent to the public sector as punishment for using excessive violence on the wrong person… who happens to be her brother! Ji Chul (Yoon Sang Hyun) wanted to be a lawyer, but didn’t pass the exam. He is a bit of a doorstep, but I love him! He has the same sense of justice as his sister and wife, but is a bit of a clutz and things just don’t go his way. 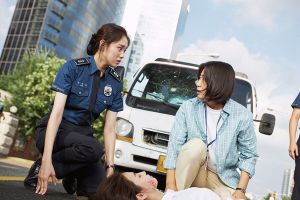 When Ji Hye witnesses a girl attempt suicide, a secret investigation into illegal recording and distribution of sex spy cams when no one will take up the case. In the sector, Mi Young’s desk partner and friend is techie Jang Mi (Choi Soo Young) whose abilities, combined with the editing was wonderful especially as I don’t really like car or foot chases. Their teamwork and chemistry was what drove this film! And talking of Jang Mi, I loved this character! She’s a tech for the police, but uses her abilities to commit crimes, such as shutting down servers so she can get BTS concert tickets 😂 I feel that from all the things I’ve watched with her in, this is closest to Soo Young’s personality. Jang Mi is sarcastic, prone to swearing and feisty!

Overall, I liked the idea of this film more than I enjoyed the end product. This film is a very important, especially with the parallels to the Rising Sun case that is still being investigated in Korea and the fact that these types of crimes are less likely to be taken seriously. There is a good balance of seriousness and silliness.

There were parts that made me uncomfortable because it felt racist. I know Korea has a bad reputation for this, but it’s no excuse. Our two mains go to two tattoo parlours during their investigation and both perceived “bad guys” are black. And then the distributors of the date rape drug made and used by the perpetrators are from the middle east and Muslim. It was unnecessary.

The actual perpetrators were a group of men, but the main guy – Woo Joon (Wi Ha Joon) was so scary! He was a disgusting human being, who I wanted our girls to beat up SO MUCH!

And this leads me talking about the acting. This was a well acted film, as expected from the cast list, and was what kept me watching despite not enjoying it as much as I wanted to. This is an important film and has a great cast, but could have been executed a lot better than it was.