Are we welcoming a little boy or girl to these wacky palaces? 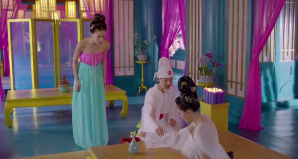 ‘He’ goes to visit 9th bro to gain more assurance that he plans to keep his promise. To prove he meant it, 9th bro gets over-dramatic and gets out a sword. He tells Peng Peng to kill him and then ‘his’ worries will disappear. 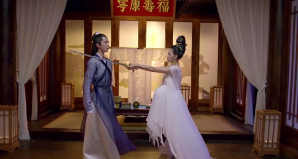 Peng Peng drops the sword, saying ‘he’ trusts 9th bro. ‘He’ owes 9th bro too much and can never repay his kindness, but can’t make any promises in relation to 9th bro’s feelings towards ‘him’. To this 9th bro tells Peng Peng to just remember everything he’s done for ‘him’ and he’ll be contented (this seems like a threat…).

Delivery is upon us and we see Qi Sheng running towards Peng Peng’s palace. He orders the physicians to find a way to lessen Peng Peng’s pain.

The birth is complicated, long and painful, but ends with a healthy little prince. Qi Sheng sits by Peng Peng’s bedside and wipes ‘his’ forehead with a towel. He tells Peng Peng that the baby has ‘his’ eyes and Peng Peng isn’t too exhausted to make a jibe that ‘he’s’ relieved otherwise their son would have to go to Korea to get plastic surgery if they had Qi Sheng’s eyes haha 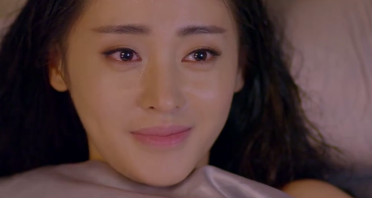 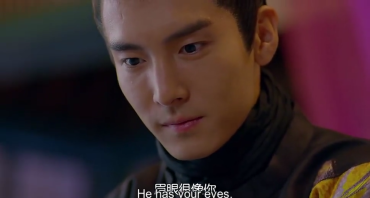 Peng Peng sees this as a way to keep the alliance strong as ‘he’ still fears that Qi Sheng may harm them.

Qi Sheng interrupts their talk and Peng Peng hastily gives Lu Li the pouch, but drops its. After a few fumbles, Lu Li goes to leave, but Qi Sheng orders her to stop and hand it over.

After several tense moments, Lu Li produces a comb from inside her dress. She hurries off when Qi Sheng orders her to leave. 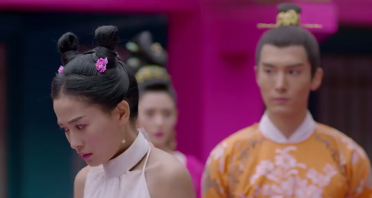 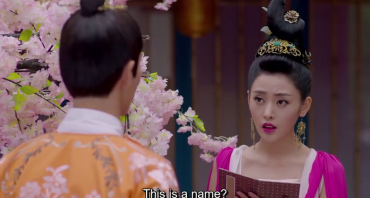 Qi Sheng is here to escort Peng Peng to the little prince’s 100 day celebration. His present is a name – Qi Hao. Firstly, Peng Peng can’t read the character right and then secondly, ‘he’ gets annoyed at not being consulted.

At the party Qi Sheng is ignoring the other wives quips about being ignored by him. The Empress Dowager scolds a tipsy heartbroken Prince Zhao for not being back in the romance game. She then rounds on 9th bro asking why he’s isn’t married. 9th bro insists he doesn’t have anyone in his sights, but the Empress Dowager isn’t convinced. 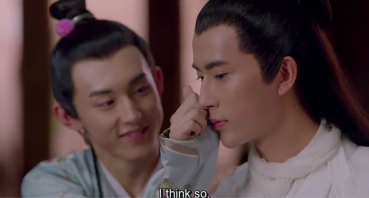 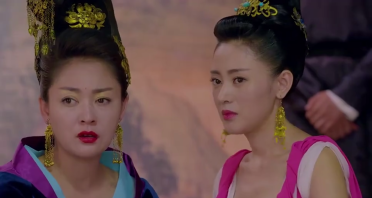 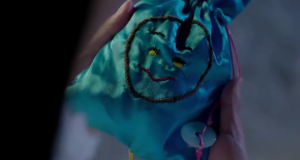 9th bro sneaks out and of course they meet outside the loos! He gives Peng Peng a gift for the little prince (I think it’s a necklace… or pendant thing idk), but says it represents his heart.

In turn Peng Peng gives 9th bro the pouch (which is way uglier than Qi Sheng’s one!), a token of good intentions.

Lu Li finds Peng Peng walking through one of the gardens, and tells ‘him’ that Qi Sheng is looking for ‘him’. On the way back to Peng Peng’s palace, they run into Prince Zhao in the exact same place where Peng Peng hit him in the past. 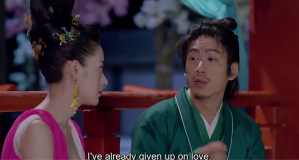 Prince Zhao remembers and tells Peng Peng not to hit him. And our cute Li Lu is disappointed that hitting someone is denied to her.

They sit down as Prince Zhao has things to tell Peng Peng, but just ends up talking about his own heartbreak and narcissism!

Prince Zhao is happy to vent about his pain, especially dissing Ying Yue. Prince Zhao tells Peng Peng that ‘he’ is his special sister.

This whole episode was focused on a baby that we still haven’t seen… there was a party for his 100 days! Could they not even afford a doll?! haha

I’m also getting whiplash from Peng Peng’s emotions. In this episode ‘he’ flips from being soft and cute with Qi Sheng, but still thinks that Qi Sheng may harm ‘him’ in the future. Why won’t ‘he’ listen to what Qi Sheng has been saying?