Pregnancy drama at the palace! 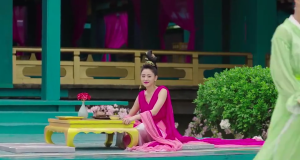 Peng Peng wants to continue with ‘his’ “miscarriage” plan, and is still adamant that ‘he’ wants to protect Ying Yue’s unborn child. Lu Li is against the idea, but suggests Peng Peng just waits until ‘he’ gets ‘his’ period and then announce a miscarriage.

Peng Peng wants to see Physician Song, but is shocked to find out that he’s become a monk after his traumatic beating… from Peng Peng haha~ Instead Lu Li goes to fetch Physician Zhang.

Instead of Physician Zhang, Lu Li come frantically running back with the news that You Lan Hall is in a mess as the Empress Dowager has found out about Ying Yue’s pregnancy and has sent for medicine to force an abortion. 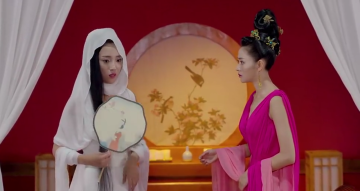 Peng Peng even has the audacity to tell Lu Li to watch her posture… while stuffing his face with duck meat! And then runs off in search of Ying Yue and is horrified to see that she has already drunk the medicine.

Due to being weirded out about how caring and compassionate Peng Peng is being, Ying Yue reveals that she was never pregnant. And that the only reason she lied was due to the hope that Peng Peng would react badly and thus Qi Sheng would side with Ying Yue. Of course that backfired.

Physician Zhang comes to visit Peng Peng and it’s now his turn to get traumatised by a beating. He is adamant that Peng Peng is definitely pregnant and this is not what ‘he’ wants to hear!

Overwhelmed by the situation of being pregnant and Lu Li’s intense happiness at the news, Peng Peng passes out.

Later on in the day, Qi Sheng visits Peng Peng to check on ‘him’. Peng Peng admits that

‘he’ can’t go through with the pregnancy. Qi Sheng knew ‘he’ would feel that way, but says he was happy when he found out Peng Peng was pregnant.

Peng Peng is worried about how having the child will increase the Zhang clan power, to which Qi Sheng reply’s that he’ll just destroy them haha! Peng Peng is also worried about ‘his’ personality and not raising a child well. And it seems that ‘he’ is incredibly worried about the birthing process (which I totally relate!!).

Qi Sheng is angry and orders Peng Peng to look after ‘himself’ and have the child, otherwise Qi Sheng will never forgive ‘him’.

It’s nighttime and Peng Peng is having intense duck cravings and grabbing invisible duck out of the air haha~ Yang Yan drops in and brings a gift of spicy duck neck. Yang Yan wants to find someone like Peng Peng to marry. Peng Peng offers to be matchmaker.

Meanwhile, Qi Sheng visits Ying Yue (does this girl just dance and scheme all day?!) and is done with her shit. He tells her that she isn’t even pitiable anymore, and insinuates that he doesn’t care about what she does anymore.

A new day arrives and Peng Peng’s mother is at the palace. Peng Peng invited her to ask about any marriageable beauties in the family and is happy to find out that there is one. Peng Peng is then confused as why ‘his’ mother and Lu Li keep sobbing in happiness.

I feel so sorry for the palace physicians! haha

I love that Peng Peng has been in the palace for months but is still such a man! He forgot that he should be getting a period lol!

I’m looking forward to future episodes as Qi Sheng is becoming softer in regards to Peng Peng. Yes, he is still stoic, but he admitted he was happy to hear Peng Peng was pregnant and there was a glimpse of a smile!

But I am scared of what Ying Yue will do now that Qi Sheng basically said bye bish! She was ruthless when she had him, what is she going to do without him?!