The final episode is here and I wish there was more! A lot of people were able to get some closure in this episode and there is a definite charm surrounding most of the characters.

We open the final episode with a floating Yassan scaring Yoshizumi at the cram school.

But before we get into this, we are sent back to Anzu’s home, where she thinks about what Kazuko said. She goes to the CD player and hits its side, but it still doesn’t work.

Back at the cram school, and Yassan begins flying around and Kazuko is repeating (in a gruff voice) everything he is saying. Yoshizumi is stunned as he says that it can’t be as he pulled him apart. 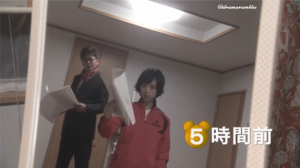 5 hours earlier and we see Yassan moaning that Kazuko is not very convincing (while reading the script in her bedroom). He feels that she won’t be able to corner Yoshizumi if her voice isn’t tough enough.

Kazuko isn’t sure that Yoshizumi is the murderer, but Yassan is sure as he is the one who tore him open and the wine bottle they found was traced back to Yoshizumi as well. Yassan (teddy form) is happily swaying back and forth on some string as he think about how he will terrify Yoshizumi.

Back to the cram school and Kazuko explains what happened: 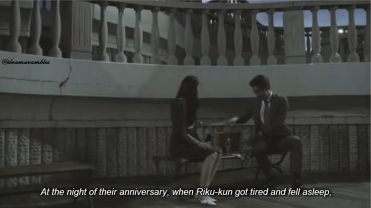 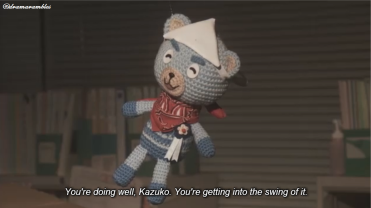 And afterwards he took them to the boat and made their deaths look like a suicide. Yoshizumi is about to find Kazuko, but switches route and finds Takai’s shoes. Thinking they can use this, Yassan tells her they will go off script, however, a rather drunk Kazuko (as she has been drinking the bottle of wine they were going to use to trick Yoshizumi) bursts out of her hiding spot and announces they have all the evidence to catch him!

Kazuko tells him it was a stupid idea to throw it in the ocean and he explains that he tried to get it, but as he was chasing Riku (who had it) the bottle rolled and fell off the marina.

Yoshizumi then shouts at Kazuko as she has fallen asleep (HA!). While Yassan starts explaining about the shoes, as Kazuko is busy being sick… Yoshizumi explains that he only wanted to make more money for the sake of his younger brother.

Kazuko takes over, seeming to have sobered up quickly, and explains that the shoes aren’t in Takai’s size, but Yoshizumi’s. They were a present for him so that he would start his life on a better path. Takai told him to straighten his life out, but he killed the couple to silence them instead. 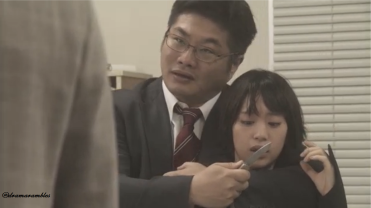 Kazuko stops and is confused to not find herself holding the script (which she tore up earlier), but isn’t fussed as it was only a line about how Yoshizumi killed Yassan.

Fuyuno and Ohashi come in and they are happy that the case is now solved. Yassan is annoyed that they haven’t explained about his death though! Fuyuno handcuffs Yoshizumi and starts to lead him out, but the latter says that he is not the one behind the whole thing. Kazuko screams and the pair turn to see Ohashi holding a knife to her throat.

Ohashi laughs that everything will be pinned on Yoshizumi, as well as the murders of Kazuko and Fuyuno that he plans to commit. Yassan is furious to hear that it was Ohashi who murdered him.

Fuyuno indicates he wants Yassan to say something to Kazuko without anyone hearing, and Yassan explains a piece of old code. Kazuko does as she is told and scratches her leg with the other, she ducks and runs and Fuyuno leaps into action and apprehends Ohashi! Kazuko is relieved that she survived~ 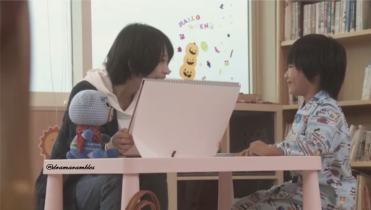 The next day, Kazuko goes to visit Riku in the hospital. She hands him over a little toy truck with his name on and explains that it was inside his teddy.Riku then points and says “Kuu-chan”, which is the name of his bear. Riku then shows Kazuko (as Saki-chan went to the doctor) a picture or ‘Kuu-chan’ that he has drawn.

Yassan tells Kazuko that he prefers to be coloured in blue, she goes to sharpen the blue pencil, however, the pencil sharpener turns out to the USB stick they have been looking for!

Riku hands her the drawing pad and says he is giving the drawing of ‘Kuu-chan’ to her. This leads Kazuko to ask if she can borrow his teddy for one more day as she has forgotten to do something.

Anzu opens her door and not happy to see Kazuko again. Kazuko holds up Yassan and tells Anzu that he father wants to talk to her, one last time. Kazuko lets herself into the house past Anzu and we then see her hitting the side of the CD player.

Yassan tells her, that she needs to hit him, but on the first try she hits too hard (Anzu is like ‘what is wrong with her’ in this background haha). When Yassan is satisfied with how she is hitting, Kazuko puts her new skill to work on the CD player and its starts to play.

Kazuko tells Anzu that the piece playing is what her father used to listen to at work and that he secretly went to cheer her on at competitions. Kazuko then speaks what Yassan is too embarrassed to say:

“An, I am sorry to have made you keep feeling lonely. I am sorry.”

Anzu thanks them for fixing the CD player, but shows that the rest of the songs are a compilation of his favourite songs (I’m not quite sure if this is a good or bad thing… ^^”).

In a field, Yassan tells Kazuko it’s because of her that he can find peace now. She then takes him over to where Fuyuno has constructed platform (?) for Yassan. The latter grumbles that he is going to heaven, not space! While Kazuko puts him the centre of Fuyuno’s creation, Fuyuno starts chanting gibberish and dancing about.

Yassan then starts to glow brightly and then Yassan, in his human form, floats a little above the ground. Fuyuno is happy that he can finally see and hear Yassan.

Yassan thanks Kazuko, as without her they wouldn’t have solved the case. Kazuko grumbles that he should at least pay her, but Yassan comes back with a life lesson: 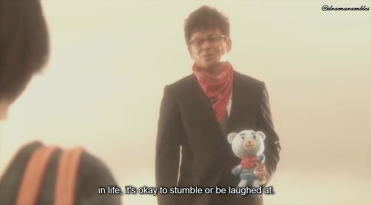 Kazuko then grumbles that she will do something that won’t get her killed. Fuyuno then thanks Yassan for his hard work as a detective and salutes him. He then nudges Kazuko and whispers that she should do it as well (he is so cute sometimes~). 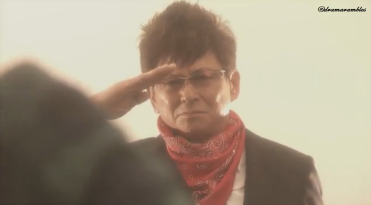 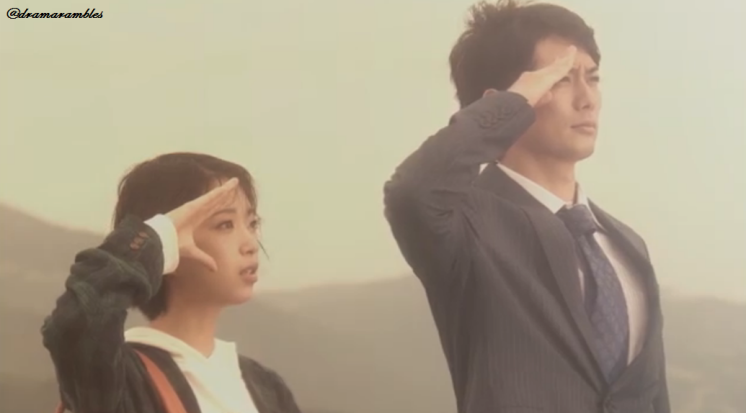 She grumbles that she isn’t a detective, but smiles happily as she salutes Yassan, when he salutes back.

Yassan then begins to ascend. When he disappears, Fuyuno cheers that he could see Yassan and happily runs around! While he is doing that, ‘Kuu-Chan’ drops into Kazuko’s arms.

Several days later Kazuko is at a restaurant doing the dishes in her chef uniform. Fuyuno comes in and tells her he returned Kuu-Chan to Riku and he sets her bear down on the counter.

He calls her cute in her uniform, but even though Kazuko is very happy about that, she forces herself to focus back to her dishes (they are rather cute together~).

Once home, Kazuko hangs her teddy up and notes that it smells nice (I assume she washed him) and is shocked to hear Yassan’s voice! (He’s back!!).

This episode was a but sporadic at the beginning with all the different scene and time changes, so sorry if some parts of this recap don’t make sense <(_ _)>

Some of the behaviour from Yoshizumi this episode was a bit different to how he acted throughout the previous episodes, but seeing as he knew the game was up, I understand. And I think it makes total sense for the pair to have been working together and that Ohashi was the one behind it all.

Overall this little 4 episode drama was very good! At times I had no idea what was going to happen or what was happening, but I enjoyed pretty much every second of this crazy ride.

And seeing as Yassan came back, does that mean there will be more? Is Kazuko really invested in being a chef or will she become a detective? Will Kazuko and Fuyuno pair up and make one of the oddest and maybe dumbest couples I have ever seen?! So many questions haha :p