This drama is a pleasant surprise. The characters aren’t the most normal out there, but they are entertaining and elevate the plot. This is my favourite episode so far and I’m kind of sad this is the penultimate episode! 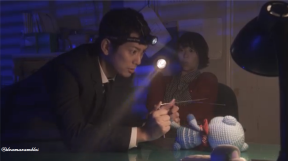 We open with Yassan, seated on a chair with the table lamp on, giving us the rundown of what has happened so far. However, Kazuko, who is searching for the USB tells him to help. Yassan grumbles that he is only a teddy bear. (They are at the cram school).

Suddenly Fuyuno comes into frame, holding some rods… (I don’t know what they are, but I’m guessing they have something to do with his strange obsession…). Fuyuno wonders if the USB is inside Yassan, but Yassan thinks the USB must be in the ceiling.

Having pushed up one of the ceiling tiles, while on Fuyuno’s shoulders, Kazuko holds Yassun up to have a look. However, his fear of a rat sends them all tumbling to the floor.

Their search is cut short when they have to hide, as Ohashi and Yoshizumi come into the office. The pair are shocked to see Yassan on the table, meanwhile Yassan is wailing about how they forgot to hide him too! Yassan shouts for Kazuko to save him when the two men leave the office with him.

Outside the building, Kazuko appears in front of them and asks if the cram school is closed as she forgot something the other day. Ohashi tells her that she committed breaking and entering. He tells her that he has done some research and the person she is pretending to be is still studying abroad in America.

Both men make her back up as they ask her who she really is. Fuyuno then runs in, snatches Yassan off of Ohashi and grabs Kazuko to run away.

Our detecting trio are now at an inn and Yassan has commenced a meeting. He asks Fuyuno who he thinks is most suspicious out of the three teachers, but obviously gets no response. Yassan tells Kazuko to join the meeting as he needs an interpreter. However, Kazuko is not interested.

Kazuko gets Fuyuno to leave and then she ties Yassan upside down for putting her in danger. Yassan comes up with a better (and safer) investigative path. They go back to the marina.

Yassan tells her to go diving, but he is the one that ends up doing so, in a net. Oddly enough, they find some evidence: a wine bottle for a wedding anniversary and low and behold it was Takai and his wife’s anniversary the day they died.

At the hospital, Kazuko gives the bottle to Fuyuno for forensics. The pair are informed that Riku doesn’t play with anyone, so they both try to get him to play. Kazuko forces him to take Yassan, and Fuyuno is shocked to see that Riku is stroking the teddy’s butt. Kazuko tells him not to say something so perverted (he asks if Riku is into butts… ^^”).

The girl they spoke to before, Saki-Chan, says it’s weird behaviour as Riku stroked the head of the bear Kazuko gave him (Yassan said it must be because his butt is cuter and nicer hahahaha what?!).

Then Kazuko and Fuyuno take turns in stroking the butt of the two teddies and Kazuko realises there is unnatural stitching on Yassan’s butt. Fuyuno asks if the USB could actually be inside Yassan. Yoshizumi overhears their conversation.

The trio are back at the inn and Kazuko asks if Yassan is really going to cut himself open. On thinking about it, Yassan has realised that there has always been a heavy feeling in his lower abdomen, heavier than cotton. Fuyuno grabs the scissors and Yassan, but before doing anything, Kazuko grabs Yassan off him. Kazuko is worried about what will happen to Yassan if they cut open the teddy.

Yassan admits that his soul may leave, but it has to be done so the case can be solved. He tells her not to worry and that he isn’t supposed to be here anyway. But Kazuko can’t do it.

Fuyuno tells Kazuko they should have a break and she should use this time to bathe in the hot springs with Yassan (what? why with Yassan?…).

Kazuko takes up his suggestion, but Yassan (who is sat in a bucket) is blindfolded.

In the mirror we see the two talk (human Yassan is still wearing the blindfold!). Yassan tells Kazuko that if he does disappear that he wants her to continue investigating the case. Kazuko still refuses to cut him open, but he persuades her, after she makes him promise that he will come back when she stitches him back up.

Kazuko tells him that because there was already new stitching on his butt, that is where she will open him up. Not surprisingly, Yassan is not a fan of this idea!

They meet Fuyuno in the hall, where he is given his drink order (which looks like milk). Kazuko sets Yassan down and the pair happily gulp the drinks down. However, when they look back at Yassan, he is no longer there.

They search the inn frantically, but don’t find him. Then near some bins, Kazuko spots stuffing. She finds the bear in the bin, slashed open and barely full of stuffing. She vows to bring Yassan back.

In the inn, Kazuko is intently focused on filling/stitching the teddy back together. She denies Fuyuno’s suggestion of taking a break. 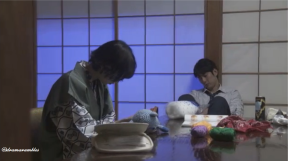 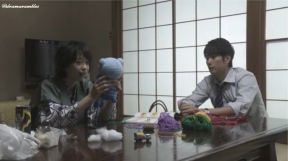 When Kazuko starts to get tired (Fuyuno is already asleep at this point!) she sees the energy drink Fuyuno left out for her, but is shocked when she reads it contains ‘Dracula extract’ (… what?!).

Fuyuno wakes up just in time to see Kazuko finish her mending. She asks Yassan if he can hear her (oh my gosh, I just noticed how frazzled she looks!! Just like me after an all-nighter :p). Kazuko is upset and angry at getting no response.

Later that day, they take the teddy to Anzu’s house and Kazuko asks her to talk to the teddy as if it is her father. Anzu is not happy with the request and finds it all ridiculous, however, she does pat the bear’s head once. When they are alone, Fuyuno gets a phonecall and has to head back to the station. He tells Kazuko that the wine had a sleeping drug in it and he wants to find out where the bottle came from.

Whilst at the marina, she tells the teddy that they may find the culprit soon and then reverts to slapping the teddy. Kazuko is upset and angry that Yassan has not kept his promise. She then punches the teddy and sends it flying a few feet away, down the steps.

All of a sudden, she hears coughing and groaning. Yassan has made his way back into the teddy!! Kazuko is very happy and Yassan is grateful for all her efforts.

And Yassan didn’t come back empty-handed, as he saw the culprit! (dun dun DUN!!)

Kazuko is actually really growing on me! This episode was great and her stupidity is sort of turning into a great stubbornness and spark. I think I’m going to be sad to say goodbye to her in the next episode.

And I definitely love Yassan! I think he is a great character, full of old man attitude, but there is a lot of heart and comedy surrounding him. I loved when he was giving the low-down at the beginning haha ^^”

With such a short drama, I liked that even though it was obvious that Yassan would come back, there was still a good amount of time used when Kazuko thought he may not come back. In this time we got to see how much Yassan has come to mean to Kazuko and how Fuyuno (even though he is very odd sometimes!) wanted to look after Kazuko and he can be rather normal haha :p

And we saw how in this episode that Anzu may be able to come to peace a little about her fathers death.

The plot, as a whole so far, has been good! I have been pleasantly surprised by how much this strange drama has kept me invested. There isn’t much ‘crime’/’detecting’ as most dramas, but these episodes are only 20 minutes long and what is here, is actually quite good, in my opinion.

I’m still going with it may be Yoshizumi, he’s the most suspicious to me. Who do you think the murderer is?