I honestly don’t now what to expect when I watch this… the plot is pretty interesting but mainly because I love crime. But the characters… wow… they are so weird! haha :p

The episode opens with Kazuko happily applying mascara, but mirror Yassan tells her she isn’t going on a date… 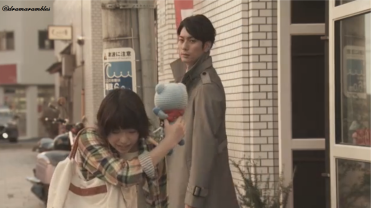 Then we see events following the end of episode 1. Kazuko starts to walk away, holding up teddy Yassan and saying it is all his fault. Yassan knows who the man is and the pair start to think that Fuyuno (a detective and old colleague of Yassan’s) understands what is going on. But they are both sorely disappointed when he asks if Kazuko knows who Riku is.

Fuyuno then asks Kazuko if she will go out with him, hence the badly applied make-up!

Kazuko is headed to the meeting spot and notes that Fuyuno is a nice guy as he visits Riku at the hospital. When she gets there she can’t see him (he’s literally behind her, and he seems to be complimenting meat…) so she throws Yassan into the air to get an ‘aerial view’.

Fuyuno runs over when he hears her, and asks where Riku’s teddy is. A few moments later Yassan falls to the floor, nose first, and Kazuko points to where he lays.

Fuyuno crouches down and picks him up and Yassan (in the little compact mirror Kazuko has gotten out) tells Fuyuno that he smells awesome (Ha! what is this drama?!).

Fuyuno is disappointed that he cannot hear Yassan’s voice (so he believes that Yassan is inside the teddy). Kazuko’s voice turns girly when she sees he really does feel bad and tries to comfort him (so much secondhand embarrassment! haha ^^”).

At the hospital, Kazuko shows Riku the teddy, but gets no reaction out of him. Fuyuno reminds Riku that he lost the teddy 3 months ago at the marina and if he can remember anything about that night. Another patient tells them that Riku hasn’t spoken or cried since he arrived. 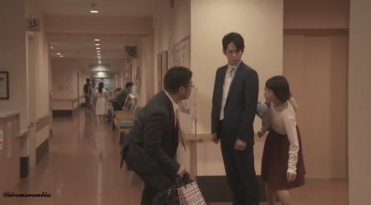 While leaving, Yassan tells Kazuko that he will get the murderer for causing a child such pain, but first they need to find out if anyone had motive to kill Riku’s parents. Yassan is sure it will lead them back to one of the cram school teachers.

They meet Ohashi on his way to visiting Riku. Kazuko tries to hide behind Fuyuno, but fails. Yassan gives her the excuse that it is a coincidence the detective is here when she was visiting Riku. Ohashi tells them that he feels guilty, therefore visits Riku often.

They begin to go their separate ways, but Ohashi turns back and asks if they can talk for a little while. 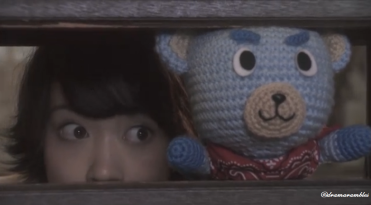 Yassan and Kazuko are then in a cafe, watching Furuya (the maths teacher) and Yassan says that he gets obsessed with things easily so could have asked Riku’s parents for money. Kazuko is surprised to see Fuyuno staring at her so intently, he is once again confused as to why he can’t hear Yassan. (So we aren’t going to see them chatting with Ohashi?…)

He then sits next to her (which makes her all nervous~) and asks if she is related to Yassan. Kazuko is adamant she isn’t, but is surprised to find out that Yassan has a daughter: Anzu. Fuyuno explains that she is pretty and has been learning the piano since she was young. Fuyuno explains that Yassan was a good father in his own way (Yassan gets all embarrassed and wants him to stop talking! cute~).

Kazuko tells Fuyuno that he would make a better father and starts playing with her hair. The pair start smiling at each other, but Fuyuno brings back his composure when his phone rings. He excuses himself and goes to the police station. Kazuko is disappointed and asks if they should leave too.

Just then, Furuya shouts in frustration and leaves. Yassan tell’s Kazuko to follow him, but is frustrated when she is too conspicuous! (She could never be a spy that’s for sure!)

Kazuko then gets a call from Fuyuno with news that the cram school is “a mediator for backdoor college admissions”. Yassan wants to know more details but is annoyed when Fuyuno hangs up the phone on him (forgetting that Fuyuno can’t hear him).

They spot Furuya being dragged away to a quiet corner by loan sharks who want their money back. To stop him from being beaten any more, Yassan tells her to shout for a policeman. This gets the men to leave and Furuya calls after them that he will pay them back.

Back in her bedroom, Kazuko is throwing scrunched up tissues at Yassan, who is talking about Furuya. He thinks that because of his debt, he’s doing backdoor college admissions and maybe Takai (cram school head) found out and Furuya had a motive to kill.

Yassan asks Kazuko what is wrong and she explains that she can’t help him anymore. She is scared that she could get hurt, and when Yassan says that he will protect her, she tells him he can’t even dodge tissue paper. Yassan realises he can’t protect ordinary citizens.

The next day, Kazuko goes to the police station and hands Yassan over to Fuyuno. Yassan asks to be put in the criminal investigation division room, but Kazuko tells Fuyuno to give him to Riku. She then walks away. Fuyuno tries to hear Yassan’s voice, but when he can’t he says that he won’t give up (Yassan’s bear face does change with his mood! That’s great!).

By coincidence, Anzu sits at the table next to Kazuko in a cafe and Kazuko starts up a conversation. Anzu doesn’t believe that her father would have talked about her as he was only interested in his work. She says that life at home hasn’t changed since Yassan died, but that she can’t listen to something now (I’m assuming she means classical music? Or a certain piece?). 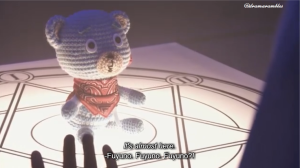 Meanwhile, Fuyuno is doing a seance. Or more accurately trying to (okay he and Kazuko are made for each other!! haha ^^”).

Kazuko heads to the restaurant which is hiring assistant chefs and runs into Yoshizumi. She accidentally blurts out about the backdoor admissions. Yoshizumi acts rather embarrassed that she knows about it and explains that Furuya was threatening Takai about it, and when Ohashi found out, he went to see Takai about it, a few days later they committed suicide. He explains this is the reason Ohashi feels guilty and visits Riku everyday.

Later that day, Kazuko meets up with Fuyuno, who explains that when important information was passed between the mediator and the school they used a USB stick and it could have been left in Takai’s belongings. Kazuko then thinks about something Yassan said to her, that if you commit suicide you have no reason to keep your shoes on.

Fuyuno says that if they were murdered, he feels sorry for Riku, which reminds her of what Yassan said at the hospital. Fuyuno apologises to her, saying that he can’t hear Yassan, so she is the only one who can be Yassan’s partner.

He explains that at this rate, Riku will be labelled as the son of parents who earnt dirty money and committed suicide. Which means he will live a misunderstood life. He asks her, for Riku’s sake, to help them investigate again. Fuyuno says that it will be okay, because he will protect her (awww *seal noises*).

That evening she gets a teddy out of her cabinet and the next day tries to trade it with Riku to get Yassan back for a while. She explains that she is working hard with the bear for the sake of his parents. Wordlessly he hands it over and takes her teddy. Yassan is happy with how she handled this.

Kazuko and Yassan are heading up the stairs to a shrine, and Kazuko is struggling to breathe, while Yassan wants to get there quickly! Kazuko gets her break, and she explains that Anzu has some regrets about her time spent with Yassan. And that she can’t listen to the CD player (oh, I was wrong…) anymore because he was the one who used to fix it.

Kazuko is ready to go on and as she puts her water bottle in her bag, she accidentally knocks Yassan a few feet away. He lands in front of Fuyuno, but is not happy to see him, because of a bad experience at his house. Kazuko can’t quite believe him, but Yassan explains that Fuyuno is an ‘occult otaku’…

Kazuko goes into a defense stance as Fuyuno walks towards her! 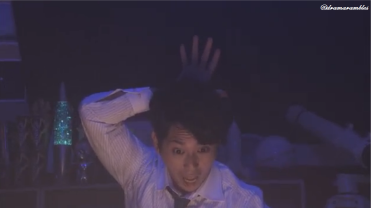 We see more of the “seance” and Fuyuno’s apartment is full of things related to the ‘occult’… and Yassan is astounded to realise this is what Fuyuno meant by not giving up.

Later on, Fuyuno hands her Yassan who is covered in talismans and then hands her a deluxe talisman. He reminds her that he would protect her (like this? I take my aww and seal noises back!!). He then exclaims that this is a power spot and starts chanting…

Yassan says that they should go look for the USB already, and Kazuko ends the episode with:

“Life is not that easy.”

I don’t quite understand what I am watching… it’s hilarious and very unpredictable, but what?!

I thought Fuyuno would be this suave young detective who would protect Kazuko and Yassan, but instead he’s really, really odd…

This episode, the ‘crime’ aspect was rather interesting and finding out more about motives was good and even though I have my sights set on the English teacher having done it, I’m still happy to play along and see what motives they come up with. And to be honest, the way this drama is going, the murderer could be anyone!

Kazuko, even though she is still pretty dumb, actually did some good things this episode. She did some detective work and she got Yassan back in such a sweet and kind way. I think her fears were valid, so I don’t blame her for wanting to give Yassan and the case up.

I’m looking forward to seeing how the plot develops and what crazy events happy next! I can’t get over that Fuyuno is a occult otaku though!! It was so unexpected! hahaha ^^”