The story of the MV is as follows: Seo InGuk has two friends, Ahn JaeHyun and SISTAR’s Dasom. Dasom and JaeHyun are engaged and this comes as a shock to Seo InGuk, however, he tries his best to go along and be happy for his friends, but it’s pretty obvious he doesn’t like this union.

At first, it may seem that his affections lie with Dasom, however, as the video progresses, there are several subtle hints that it is JaeHyun, who is the object of Seo InGuk’s affection. Some of these include Seo InGuk looking at JaeHyun, also on the balcony where he happy that JaeHyun is paying him attention, but disappointed when Dasom is between them when they take the photograph. 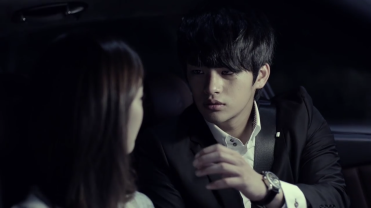 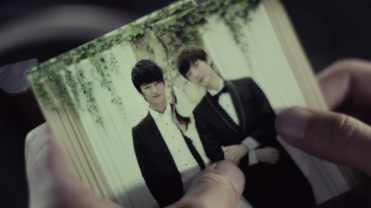 And then at the end, the big reveal is when Seo InGuk rips the photo and puts him and JaeHyun together, completely removing Dasom.

I thought that at the end when they are in the car, that it was sort of him trying to imagine that the reason he doesn’t like the union is because he is in love with Dasom, however, he can’t get himself to lie to himself. That is why JaeHyun replaces Dasom in the seat. That’s what I thought, what did you think?

Therefore I sort of thought that this video and song were about him trying to say ‘please don’t go’, but someone he can’t get himself to do that. So he is just suffering in silence.

I looked at the lyrics (which you can see here) and there is definitely a sense of not wanting that person to go and being conflicted. I love that they do talk about the car in the song, which makes the video even better. However, there is a definite sense that they are a couple in the song, but I don’t think that detracts anything from the video and I think it is great that K.Will decided to use his song in this way as homosexuality in Korea is not really accepted and not celebrated by many people, so having it in this form is wonderful (even if it is a sad ending. Why do homosexuals rarely have a happy ending?!).

I mean, the visuals for this video were beautiful. The lighting in the house was lovely and bright and warm. The wedding scenes were very pretty. The scenes in the car, which were all at night, were great. Those car scenes had a real sense and atmosphere of sadness and emotion, which is mainly due to Seo InGuk’s acting, but the simple background and lighting made it very emotive. Everything seems more emotional at nighttime right?

Also, Dasom made a very cute and happy bride-to-be/bride and her scene in the car was well acted. JaeHyun was good, I mean he didn’t really have much to do, but just be a man in love (am I being too harsh haha ^^”).

But of course, the stand out star here is definitely Seo InGuk ♥

I love K.Will’s vocals! He always sings with such emotion and power. I feel comforted and wrapped up in the warmth of his voice, even if the song is sad!

The chorus for this song is so catchy and it always sticks in my head after I listen to this song. This may sound strange, but that also happens for the tune of the song, the little tune that plays at the beginning of the song and then behind the chorus.

This leads on to the music, I think it is so lovely and soft behind and it also weaves through K.Will’s vocals. It is in no way overpowering and it really makes the flow of the song very enjoyable and, personally I think, more emotive. And at times you are aren’t expecting the power of his voice and I think that surprise is very nice.

Here is a live performance of this song on Mcountdown. I really love the ease with which K.Will performs. Plus, he is very handsome and suave (and looks great in a suit!):