I was not intending to watch this drama, even though I really wanted to, as I have so many others to watch. But here I am, 3 episode in~

I was first interested in this drama as I was familiar with the Korean film version starring Kim Haneul and Jang Geunsuk.

Kimi wa Petto (You’re My Pet) was released last year and follows the life of Iwaya Sumire (Noriko Iriyama) who is a journalist and becomes rather down on her luck after her relationship ends. Takeshi Goda (Jun Shison) is also down on his luck and is basically homeless. A drunken Sumire takes him in because he reminds her of her childhood dog. He ends up becoming a permanent resident in Sumire’s home as her pet: Momo.

Are you still with me? Typing out the plot does not help with how weird the basis of this story is haha

The acting is often over the top and is combined with the usual quirky Japanese sound effects and graphics. This would be a problem if the plot wasn’t so absurd and I would be put off if it tried to take itself seriously.

That’s not to say there aren’t moments that tug your heartstrings. 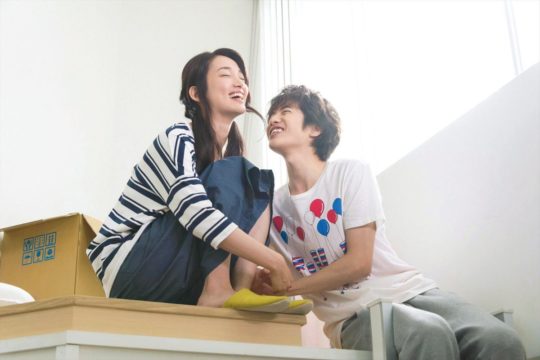 I’ve only watched 3 episodes, and I have high hopes for this drama. I am enjoying it immensely and really like the fact that both participants in the pet/master scenario are very aware of how strange the situation is. However, they both go along with it because Goda needs a roof over his head and food, while Sumire appreciates the company. I also enjoy how the pair have cute moments, but have still had meaningful conversations and Momo isn’t just a pretty face.

I will say that the dancing parts make me a little uncomfortable… It might be because I’m not well versed in contemporary dance (or he’s just not that good…).

There are clear tropes that you find in most romantic comedy dramas and mangas (as this is a manga adaptation by Ogawa Yayaoi) and I still get sucked into the drama every time! I am unashamed haha :p

It was nice to see a psychotic male, and I’m pretty sure we are headed in the direction of an even more overbearing a manipulative female. At this point, I’m also not bothered by who Sumire ends up with (even though I know and it’s obvious) because I just want her to be happy and the two candidates (so far) are good, flawed people.

Is there anyone you would want to be your Momo?