Time for another Top 5 and this time it’s completing My Little Lover, which means for now, I have to put this drama to rest and stop trying to think about it haha ^^” I found this so hard, there were so many hilarious moments that I could have chosen!

I was so happy when Shunichi said this. It was unexpected, especially how fervently he said these things. Chiyomi needs him to protect her and it shows such a shift from the firt half of the drama where he vocalised that she was a burden. Here Shunichi is realising for himself, not for anyone else, that he wants to protect Chiyomi.

I loved this scene so much!! If someone asks me to marry them like this, then I’m pretty sure I would accept! It was so sweet and this couple were hilarious when they argued, but there was such a sweet undertone to them that made this scene really heartwarming ♥ Not to mention that I love unlikely couples haha ^^” 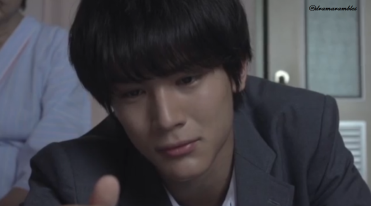 I was torn, in this episode, to choose between this scene and the scene at the end where he tells her not to leave him because her place is by her heart. However, I kept thinking about how she couldn’t hear and he was smushing her against his chest haha ^^”

Anyway… I really loved this scene. In this episode, we really saw Shunichi struggle with the idea of not having Chiyomi with him and not knowing if she was safe. So, when he saw that she was safe, the face he makes really highlights his love for her. I really commend Taishi for his acting, because his facial expression were so wonderful, especially in relation to Chiyomi and he most likely had a ball or something to act with, instead of a real person to play off.

To be completely honest, this whole trip was rather adorable ^^ However, this scene was so lovely. Chiyomi is worrying about whether or not it will work and Shunichi steps up to reassure her. I felt that this was a lot more poignant than the first confession. It’s a far more private moment and Shunichi is sure of himself. The whole atmosphere of this scene was really beautiful, and amplified, for me, this sweet confession. 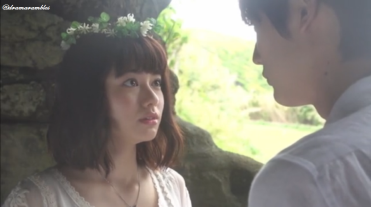 This scene made me so happy, even happier than watching the wedding part (mainly because that part was so unexpected haha!). I loved it because it was so beautiful and simple and really brought this whole drama in a lovely full circle. I also love the fact that this whole aesthetic looks like it comes straight out of a fairytale and who doesn’t love that!

What were some of your favourite moments? I would love to hear some, so don’t be afraid to comment below~

2 thoughts on “My Little Lover – Top 5 Moments of the Second Half!”