Contestants on Future Star 501 wake up in their training camp, but a member of their team is missing. JoonYoung slept outside of one of the tents, but he’s disappeared. 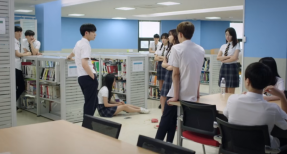 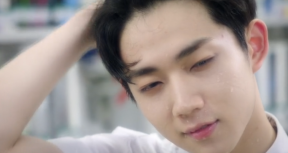 Meanwhile, in a school library, our two geniuses are confronting a popular girl – TaeHee – who says she’s covered in cola because her cola spilt while helping DaEun (who is also covered in cola and sat on the floor).

HanEum (Yoo SunHo) explains to those watching and TaeHee, that her story would account for the splashes of cola on her front, but not on her shoulders etc. To further

explain his point, HanEum splashes water on our other genius – Oh Sung (Ahn HyeongSeop) – who turns it into a model moment haha

HanEum works out that whoever threw the cola is left handed and who is left handed? TaeHee. She denies it, but Oh Sung explains to everyone watching that TaeHee is popular, smart and pretty, but a dark horse has appeared – DaEun.

After they prove that TaeHee is the culprit the crowd disperses and our two geniuses start bickering about the water. Detective JinKyung (Kim NamJoo) walks in as Oh Sung pours a bucket of water over HanEum. She shouts “Let’s go!” and they happily follow her shouting, “Yes, Sir!” 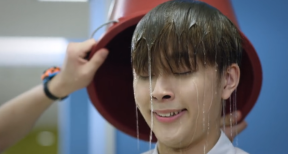 The bickering continues in the car, while our geniuses are being punished in the usual Korean style, arms up.

They reach the Future Star 101 training camp, where the other boys explain that they don’t know why JoonYoung would leave, especially a week before their live TV performance. The rest of the team wonder if JoonYoung’s disappearance could be the work of another team as JoonYoung is the most popular contestant.

This is a job for Detective JinKyung and her unofficial investigation team: Rebel Detectives. A couple of the guys get excited (despite their dumb poses haha) as they solved a huge case that the police couldn’t.

JinKyung goes into investigative mode and our geniuses follow suit. They find several things around the spot where JoonYoung slept before going missing. The first is powdered ‘azepine’, a sedative. The second are skid marks of a wheelchair S-31 sold by hospitals. The last thing is a warning style note in a Korean Language book. The lines are from the poem ‘Sorrow to Joy’ by Jeong HoSeung.

Oh Sung deduces that it wasn’t just 5 guys at the camp, but also a girl.

This looks like it’s going to be hilarious! Even in this first episode, the characters are rather ridiculous, especially Oh Sung and JinKyung haha

The way they find clues is in a somewhat Sherlock-esque way. But with more camp haha! I’m interested to see the dynamics of our team, especially JinKyung as she hasn’t done much yet. I mean she’s fabulous, but she’s pretty much only acted as a chauffeur so far.